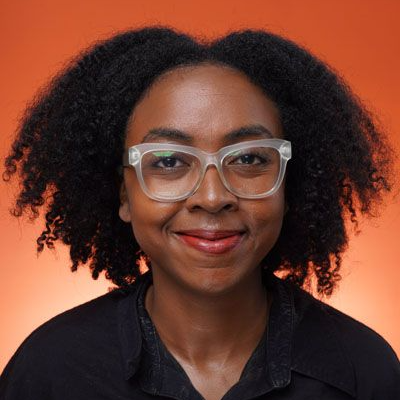 Imani Spence is an Arts and Culture writer. In the Arts and Culture she is mostly interested in literature and theater with a focus on the literary history of Baltimore. In 2022, she graduated with her Master’s in Library and Information Science at the University of Maryland, College Park. In the past, she’s freelanced for BmoreArt, the UMBC Magazine and City Paper (RIP). Her coverage focuses on how art affects the lives of people who live and create in Baltimore. Baltimore’s rich literary history is fertile ground for more coverage on literary arts and writers who live here. Art is fundamental to a healthy city. At the UMBC Magazine and BmoreArt, Imani learned about the power of community. Writing about arts showed Imani the varied talent that is present in Baltimore. In her personal life, she has been learning about Baltimore’s queer history and how it directly ties to artists who live and work in Baltimore. Working with these publications, Imani has learned the value of establishing community around shared history and interests. Imani has had a varied work background, spending time in media, academia and nonprofits since graduating from the University of Maryland, Baltimore County in 2016. She began her career at the Marc Steiner Show as one of two producers on the daily radio show. Radio and sound production was what made her most interested in journalism as a profession. She served as Vice President of the Baltimore Abortion Fund’s board from 2018 to 2021 which empowered her to be politically engaged with Baltimore. Imani loves Baltimore, books and TV but is skeptical of all books and TV about Baltimore.

The Baltimore City delegation on Friday voted unanimously to support Walter Workers United’s collective bargaining bill, which followed legislation introduced in the House and Senate that would require the Walters to recognize the union.

The staff and board of Single Carrot Theatre have decided to close the curtain after more than 60 performances of known and original works.

The Baltimore Museum of Art named Asma Naeem, its chief curator since 2018, as its new director. Naeem will be the first person of color to lead the museum.

The theater is still hoping to raise an additional $1.7 million for renovations.

”Tonight, celebrate this great state,” Moore told the crowd. ”Celebrate your neighbors. We are Maryland because of each other not in spite of.”

Marylanders across the state are also looking for unique looks for historic inauguration of Maryland's first Black governor.

What a sewing class taught me about creativity and patience

The Parkway Theatre is another victim of the pandemic; board contemplates venue’s future

The board will hire consultants and solicit community input on the future of the organization while the Parkway remains closed.

Two Baltimore performers will take the stage at the Hippodrome this weekend for the theater’s run of “Jagged Little Pill,” a musical inspired by Alanis Morissette’s 1995 breakthrough album of the same name.

Elegance Bratton, director of ‘The Inspection,’ on forgiveness and closure

Director Elegance Bratton speaks about his semi-autobiographical film, "The Inspection," which tells the story of his time in the Marine Corps as a Black gay man.

New B&O Railroad Museum exhibit shows for some on Underground Railroad, there was an actual train

The Underground Railroad, a network of people, routes, and safe houses, helped enslaved people escape bondage. Some seeking their freedom, like Brown, used the actual railroad.

With an MFA and MBA from Yale, Frank has been active in theater across the country including New York City’s Public Theater and the Los Angeles Music Center, among others.

Can’t find clothes to fit? Make your own.

Tired of depressing trips to department stores trying on ill-fitting clothes, many are learning to sew to make their own.

A dancer trained in Baltimore returns home to perform in ‘Tina: The Tina Turner Musical’

Aliyah Caldwell, Baltimore School for the Arts and Towson University alum, plays a member of the Ikettes, who were the backup vocalists for the Ike & Tina Turner Revue.